Bring forth the May flowers”

It’s March, the month most gardeners have longed to come around.

Traditionally, it’s the first of the busy months as spring finally rolls in. The beginning of this March, however, may have traded places with February. A week of bitterly cold winds, morning de-icing of car windscreens and even snow – just a flutter here in Cardiff but it’s the most we have seen the entire winter.

This weekend was different. It had been building all week. Dry days and periods of sun and clear skies. Even the wind had begun to feel warmer.

I awoke on Saturday to a blissful sight – clear skies and sunshine. There remained a slight chill still in the early part of the morning but there was no wind to speak of which made all the difference.

I was also pleased this weather had greeted me on Saturday morning, as an allotment loving five year old had been nagging me all week to go down the plot. I swear it was like she had just been told it was Christmas day!

Working on the plot felt as Beeton describes the March of the Victorians.

Although the trees are still leafless but for the evergreens, there is much to a mild sunny day in March that tells us that nature is once more alive. A murmuring of life in the air. Violets and primrose are poking through and even a lone bee makes an appearance. If you look closely at the trees, you can see they are just bursting into leaf.

With the pressing need for crops as early as possible, March for the victory gardeners of WW2 was greeted with enthusiastic seed sowing. Even Mr. Middleton was exclaiming the crocuses will soon be out, the birds are singing, and this is the time when the gardening fever spreads.

I have been desperate to plant out the early potatoes, Rocket. Progress on  actual growing was the feeling I longed for, but I was also worried that the chits on these babies would soon outgrow the spare room! 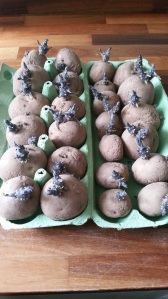 been chitting for six weeks and I am very impressed. Short and dumpy chits – just what the gardener ordered.

Then it was down to business. After digging a trench, Ava helped me to mix fish, blood and bone into a bucket full of compost. She initially pulled a disgusted face when learning the make-up of the plant food but this was quickly followed by a shrug of the shoulders and she carried on mixing it up with the compost anyway.

After filling the bottom of each trench with the compost and fish, blood and bone mix, Ava carefully set out the potatoes – a foot apart, chits up along the trench. We stopped to admire our work. 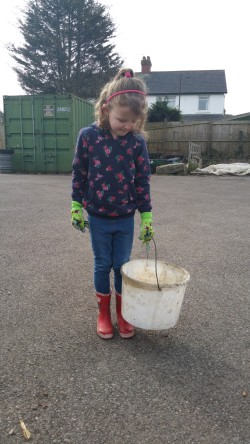 After doing the same for another row, we backfilled the trenches before taking a break. Tea for me, apple juice for Ava and mini eggs for both! Hurrah!

Where would we be without onions? They must be the mainstay of global cuisine. In the kitchen, onions must be the most frequently used vegetable. They are the base of some many dishes from sauces to soups to salads.

Growing from sets, I’m hoping for a relatively easy crop to manage. I’m told, provided they have the sun, onions will produce a crop practically anywhere. Well, I can provide the ‘practically anywhere’ but the sun is a little out of my control.

I have not grown onions before and I am excited by the opportunity to finally be able to do so. Carol Klein remarks that harvesting onions is one of her favorite jobs.

I have decided on just one variety to grow this year called Turbo. A popular, medium sized brown variety that apparently produces juicy onions.

I’m growing the onions on an existing bed which provided me with a wonderful crop of french beans last year. I already have two rows of garlic in this bed which were planted last November. Despite the horrendous rain over the winter, these are looking rather good. The bed is well cultivated and I even managed to get a large amount of homemade compost into the soil prior to planting out the garlic. It will, I believe, be a sound bed for growing the onions.

With Ava at my side, we began by marking out two rows 12in apart. Using a finger as a makeshift dibber, I prodded the soil as not to risk damage to the roots on the onion sets by pushing them straight in. We had time to plant two rows of onion sets each in their individual rows 6in apart. I need to fork over the remaining part of the bed before we plant a few more rows. 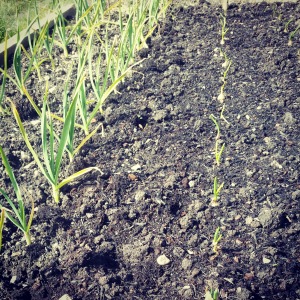 Ava asked the typically insightful question only a child asks – If we peel the baby onions now, will that save us peeling them when they have grown? Alas, I replied, unfortunately, it will not.

After 6 hours on the plot, it was I who tired first and wanted to go home for dinner. Ava did not want to leave. She got a little upset and despite having no intentions to visit the allotment on Sunday, I caved and promised another trip the next day. It is lovely how much she enjoys it at the allotment – I won’t complain. 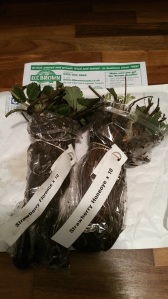 e over when we arrived home. It was thrilling to see the postman had in our absence hid a parcel behind the bin. Our strawberry plants had arrived. An earlier edition of Grow your own magazine had presented an offer I found hard to refuse. I had placed an order for twenty strawberry plants to provide a full summer season of strawberry enjoyment. Before me lay 10 Florence and 10 Honeoye.

Sunday arrived and brought with it another glorious day. Ava’s second question of the morning was ‘when are we going to the allotment?’ Her first, quite rightly was ‘can I have my breakfast?’

While daddy again dug another bed over and incorporated some more compost  into what would soon become our strawberry bed, Ava made us brunch.That class
ic allotment delight – Mudpie.

This one was particularly special as it comes with added woodchip sprinkles. Yum!

We were joined a couple of hours later by Hannah, my wonderful fiancee who brought lunch and carried out a site visit. I am very pleased our progress is very satisfactory. 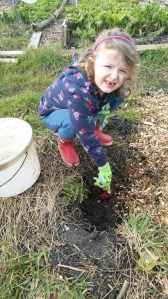 a wonderful weekend on the allotment. Planting and making progress is, of course, a great feeling but equally so is the time spent there with Ava.  It’s thrilling she enjoys being at the allotment so much. I hope the enjoyment stays with her as she grows up and means for the three of us, the allotment is a big and fun part of our lives. I have a cunning plan that as Ava plants and sees the variety of fruit and vegetable grow, it will mean she is very keen to eat them too!

How is your allotment or kitchen gardening coming along? I’d love to hear from you. I’m always grateful for any advice, tips and guidance. Drop me a comment below and connect with me on Twitter,Facebook, Instagram and Pinterest.