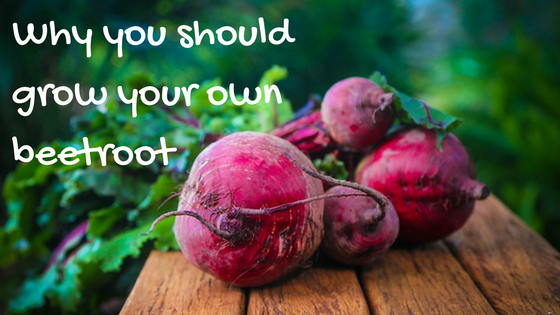 In June 2016, total sales of beetroot in the UK topped £54 Million. Sales of Sainsbury bunched fresh beetroot were up 25% on the previous year.

Industry experts touted the rise in popularity as a result of its label as a ‘superfood’. People were buying up the crimson globes to juice and drench themselves in their goodness.

I’m very cautious when I hear the term ‘superfood’ thrown around for any product. My cynical eye glares down on the opportunity by supermarkets and the food industry, in general, to exploit the term to sell more of a product in as many forms possible.

However, beetroot has been sought after as a powerful or ‘superfood’ long before the latest celebrity cookbook latched onto the idea.

A very brief history of beetroot

Beetroot evolved from the wild sea beet and was used more for its leaves than root. Apparently, it’s mentioned in an Assyrian text around 800 BC, growing in the Hanging Gardens of Babylon. The Hanging gardens of Babylon of course, exist only in the realms of legend but it demonstrates that Mesopotamia knew of the crop.

Around 300 BC, the ancient Greeks cultivated beetroot but only consumed its leaves. They thought highly enough of the roots, however, offering them to the sun god Apollo in the temple of Delphi.

The Romans consumed the roots mainly for medicinal purposes. The beetroots were boiled in salt water and the resulting broth was drunk to treat constipation or fever. However, the famous Roman gourmet, Apicius, provided a number of recipes for beetroot in the book “Cookery and Dining in Imperial Rome”.

The beetroot we know today first appeared in Europe during the 16th and 17th Century. This is when dishes using beetroot such as Borscht evolved. Later, the Victorians used beetroot to add much-needed colour to our diet and as a sweet ingredient in desserts.

Despite my reservations with the term ‘superfood’, we do know some health benefits beetroots can provide.

Beetroot is a good source of iron and folate. It also contains nitrates, betaine, magnesium and other antioxidants (notably betacyanin).

A review of the current evidence from 2013 concluded that beetroot juice was associated with a modest reduction in blood pressure.

A 2010 study suggested that a diet high in beetroot juice may increase blood flow to certain areas of the brain. This may be positive news in respect of Dementia, although this was a small trial and more research is needed.

Why grow your own beetroot?

I’ve said previously, growing your own of even cheap and readily available vegetables enables you to enjoy a huge variety the supermarkets just don’t stock.

Beetroot doesn’t fall into the same category as potatoes and onions as necessarily a cheap to purchase vegetable. This alone is a reason to grow your own on your allotment or kitchen garden.

For many people, beetroot is something that comes pickled in jars or squeezed into those awful vacuum packed clumps on the supermarket shelves.

Even when fresh beetroot became more available in the supermarkets I never added it to my shopping basket as I thought it was a difficult vegetable to prepare. After growing my own last year, I was amazed how easy it actually is. The simplest method is to pop the roots into boiling water for 30 minutes and the skin just pulls away.

Fresh beetroot is delicious. It can be grated raw into salads or boiled or roasted whole to serve cooked in a range of ways. As I’ve mentioned, there is the popular beetroot soup of Eastern and Central Europe, Borsht.

What varieties of beetroot to grow?

Boltardy is the standout variety. A classic deep red beetroot and incredibly reliable. It’s hardy too, which means you can sow in modules undercover in late February for an early crop which is super tasty when they reach the size of golf balls.

(Note: There are some affiliate links in this post, which means you can click on them to buy. If you do, I may get a small fee. It doesn’t affect the price you pay.)

However, when you have the space an allotment or kitchen garden provides, use the opportunity to grow the variety of beetroot available. It comes in more than one colour!

This year, as well as Boltardy, I’m growing Detroit 2, a popular variety with a rich maroon colouring and a good flavour, and Burpees Golden, a golden coloured beetroot which keeps its colour when cooked.

How to grow beetroot

As well as offering a huge selection of colourful varieties, beetroot is very easy to grow.

If space is tight, it’s possible to grow a crop in containers too – here’s a video of the result of growing 10 beetroots in one pot from Home Grown Veg.

Beetroot seeds can be sown directly in shallow drills from March. When the seedlings reach 1 inch high, thin the plants out to a distance of 4 inches apart.

Water during dry periods and keep on top of weeds, especially when seedlings are small.

Make a final sowing of beetroot in early July for a harvest in September.

Beetroot works very well in modules. The benefit is the easier management of seedlings.

If growing ‘Boltardy‘, an earlier crop is possible by starting seedlings off in modules undercover from late February/early March. One tip is to grow them in smaller modules and transplant when the seedlings are well established – otherwise it can be a bit fiddly.

A word on Pickling

I’m sure having contended with the pretty overpowering vinegar taste of jars of commercially available pickled beetroot, I feel sure I should get some frowned faces if declare that I’m rather partial to a forkful of the stuff. However, before you click away in disgust, I’m talking about homemade pickled beetroot.

A delicious recipe for pickling beetroot can be found in one of my favourite books on home preserves written by Jill Nice.

Preserves: A beginner’s guide to making jams and jellies, chutneys and pickles, sauces and ketchups, syrups and alcoholic sips

is available from Amazon.

Are you growing beetroot? I’d love to hear what varieties you recommend. If you have a favourite recipe for beetroot, let me know in the comments below or over on Facebook.

12 thoughts on “Why you should grow your own beetroot”